You are here: Home / Articles / Does it Matter Whether Your Gynecologist Is Male or Female?

When I started my OB/GYN training in the 1970s, 95% of obstetricians and gynecologists were men! Now, almost 50% of practicing OB/GYN specialists are women and 80% of the residents are female.

If you have ever wondered whether to choose a male or female gynecologist, you may be interested in a study published this year on the differences in their practices. The American Congress of Obstetricians and Gynecologists released a report on this topic, exploring the issue from both a clinical and an educational perspective. The study examined whether there are differences in the doctors’ opinions, attitudes, and practices, and how the changing workforce may impact women’s healthcare.

Researchers reviewed surveys to determine whether noticeable differences existed in male versus female doctors. There were some general differences uncovered. Among gynecologists, for example, women were more likely to have a supportive attitude about abortion than men, and men rate the quality of their own work higher than women do. Men prescribe more pharmaceuticals, and women make more referrals to specialists for medical conditions. Incidentally, another difference is that female gynecologists still earn 23% less than their male counterparts. When it comes to Board certification in OB/YN, females lag behind with only 57% being certified in the specialty compared to 73.4% of male OB/GYN specialists.

So how should you choose, and does it matter which choice you make? As I tell my male medical students, “Remember OB/GYN is not as if you were going on a date. This is medicine in the interest of women’s healthcare.” My female medical students are told, “Just because you have a vagina doesn’t mean you can relate to all the concerns a patient may have and you must listen and be compassionate.”

Many women are just more comfortable with a female gynecologist, and that’s fine. Often, female patients feel that female gynecologists will simply have more empathy for their gynecological problems and experiences. After all, female doctors have the same reproductive organs as their patients, and often have experienced the same issues. This may give a woman a unique insight that a man is incapable of having. Knowing that your doctor understands what you are going through can be reassuring. In addition, some women feel that female doctors are more apt to be gentle, knowing what the exam feels like – physically and emotionally.

Also, it may be easier for patients to discuss certain issues with a female gynecologist. Some women can feel uncomfortable talking about sensitive or embarrassing issues with men, and that’s a good reason to choose a female physician. Painful intercourse, sexually transmitted infections, and unusual vaginal discharge may be easier to ask a female doctor about.

One study highlights the benefits of male gynecologists. The study, from the American Journal of Medicine, shows that men, on average, spend more time with patients, and were more likely to make sure they understand what patients are saying through paraphrasing. Some people feel that because men have never undergone gynecologic exams, they may be even more sensitive to the distress they could possibly cause. This shows that there are several benefits to choosing a male gynecologist, and women should not discount a doctor strictly because he is male.

The takeaway is that male and female doctors each have their strengths – as do individual doctors of either gender. They also have their weaknesses. Being available, competent and compassionate are the three attributes I want from any physician. If my OB/GYN is too busy taking care of her family and is not available for me, then an OB/GYN who IS available and who is competent will be my new OB/GYN. I recommend choosing a doctor who is Board-certified, one who is experienced and capable, and one with whom you have a good chemistry. Having a doctor with your best interests in mind is far more important than whether the doctor is male or female. 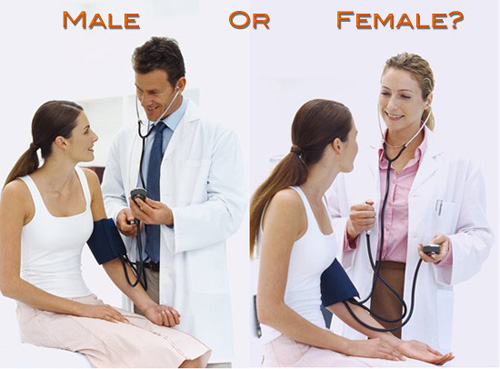