The Toronto-area man had been experiencing mouth pain for about a week before the smell began. After arriving at his local emergency room, nurses suspected he had some kind of oral abscess and asked ER physician Dr. Raj Waghmare to take a look.

Waghmare asked to look under the man’s tongue and noticed what looked like the whitehead of a pimple poking out of one of his saliva ducts. There was also the putrid smell, one that Raghmare said reminded of “the putrid pungence of blue cheese.”
It turned out the man had a “sialolith“: a salivary duct stone. It’s a buildup of minerals and salts in one of the ducts leading out the saliva gland under his tongue. The blockage prevents saliva from exiting the duct, allowing bacteria to build up and leading to a smelly infection.

“(The stone) could have been there for 20 years but was never big enough that it was blocking anything,”
“He said there were times where it would swell up and move a little. And then it would clear and the saliva would be able to pass through.”

Waghmare had to extract the blockage – but first he needed to put two masks around his mouth and nose because “the stench was just really gross.”Using forceps, he was able to pull the stone out in one piece — a process he says that was perhaps a bit uncomfortable to the patient.
The stone turned out to be huge, as the photo and video show. Other case reports about saliva duct stones have reported stones smaller than 10 millimetres; some have been larger than 15 mm.
This one was 23 mm long. A giant, by medical standards. 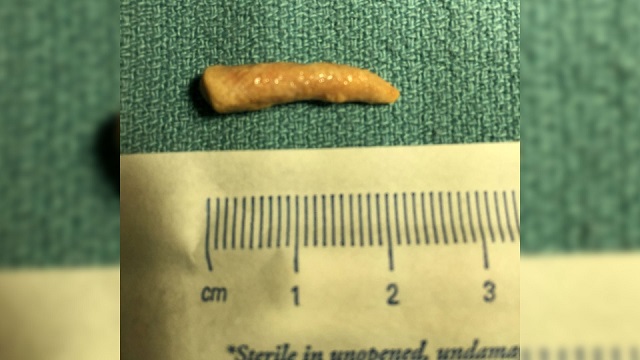