LAHORE – The Lahore High Court on Saturday declared National Testing Service (a private firm) as illegal with directions to Higher Education Commission to ensure that no more tests will be conducted by any private firm until and unless a national testing service is constituted through proper legislation.
Justice Mansoor Ali Shah of the LHC passed this order on a petition filed by a female student of PhD Syeda Anam Ilyas against illegal status of National Testing Service and the tests taken by it for admissions and scholarships for higher education in and outside the country.
In its order, the court directed Higher Education Commission not to sponsor or extend any patronage to NTS, as it was not an officially approved service under any law while all universities and other academic institutions recognised by HEC were not under any lawful obligation to conduct tests organised by NTS or be bound by the results of NTS in the matter of admissions or grant of scholarships.
The court further ordered HEC to propose an amendment in the ordinance/rules in order to provide a proper regulatory statutory framework for establishing, monitoring and supervising a “national testing service”.
The judge ordered that till such time that proper legislation was put in place; HEC would not initiate the process of selecting and appointing a national testing body under the ordinance. He observed that admissions and scholarships were not dependent on results of NTS tests with directions to HEC that the order would be displayed at its website.
However, the judge further observed that admissions and scholarships already granted or refused on the basis of the tests conducted by NTS in the past would not be reopened after the order while exiting arrangements between both NTS and HEC as per their agreement would continue till May 30, 2014.
During the course of proceedings, Nazeer Hussain, Regional Director HEC and Waqar Sami Khan, Secretary NTS were also present while representatives of various universities and colleges also assisted the court by their suggestions over the status of private testing service. The petition was disposed of. 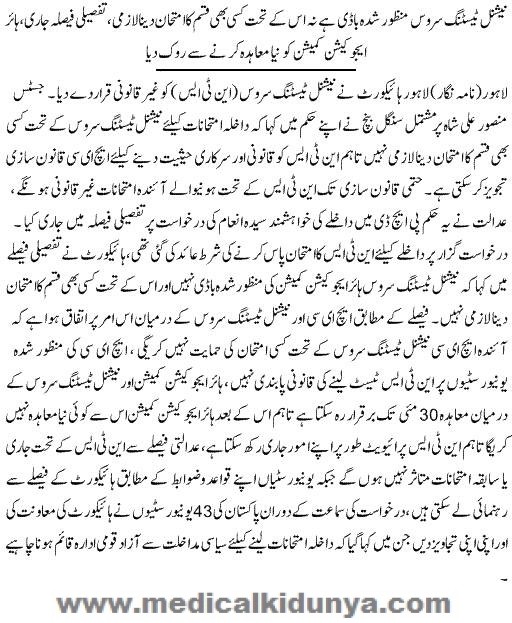